With over 50 years of collective experience in corporate events and catering, the team at Premier Crew draw on their knowledge and skills to execute bespoke, amazing events. The Premier Crew are a dynamic team – they have worked together for many years, which brings a great atmosphere and energy to the company and a passion for creating the best events in Essex.

The events team is headed up by Senior Events Director, Sarah, who ensures her team remain calm and collected in any situation. Their agility and expertise means that thinking on their feet is second nature and that they can react quickly to any last minute changes. They are engaging and personable and really listen to the wants and needs of each of their clients.

The experienced team of chefs is headed up by Food and Beverage Director, Geoff. The team create delicious and bespoke menus in their state-of-the-art kitchen – whether it’s hearty home cooked menus or fine dining, they can turn their hand to anything. Their menus reflect the latest trends and use seasonal and local produce whenever possible.

Working alongside Sarah and Geoff, is Finance Director, Zoë, who ensures the smooth running of the day-to-day business. Lucy and Sue are also part of the Events team and Chris is in the Kitchen making up the rest of the Premier Crew team.

Premier Crew Events Headquarters are located conveniently next door to Martels Wedding Village, where they have around 20 different suppliers all under one roof – a permanently open wedding fayre. 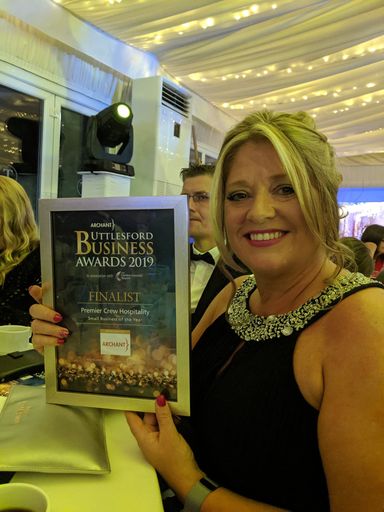 Premier Crew started life over 20 years ago as a corporate events and catering company in Hertfordshire, serving a range of businesses, alongside being the sole caterer for the local university’s overseas student division. Premier Crew expanded its focus to include weddings during 2005 and quickly gained a reputation for creating spectacular weddings across Essex, Hertfordshire and the surrounding areas.

The company was founded by Naomi PittRoche, who sadly passed away following a short battle with cancer in early 2020. Naomi is fondly described as “the ultimate party girl” and very much devoted her life to making sure that people enjoyed themselves at any event or party setting. Her original strapline for the business was “bringing people and good times together” and she was determined to build a company that focused on doing that extremely well.

From its inception, the company has held a strong set of values and beliefs close to its heart, which have helped to make it successful. Premier Crew has always believed in the importance of the success of the entire event and there are many examples where the company has “saved the day” by resolving issues with other suppliers and elements of the event. This has meant that they manage everything so smoothly that there is no need to hire an additional event planner.

Over the years Premier Crew has worked hard to develop relationships with an array of suppliers and venues in Essex, Hertfordshire and London. They have also become a recognised specialist in marquee/outside weddings and events, which some companies have found difficult given the challenges that outside working presents.

In 2010, Premier Crew outgrew its premises in Baddow and moved to Martels in Barnston, where the business is headquartered today. Their facilities include a purpose-built commercial kitchen, meeting rooms and a tasting facility.

The company has always recognised the importance of people in delivering successful events. Premier Crew has provided significant employment opportunities in the local area and provides casual work to over 100 young people every year. In addition, they have successfully managed to attract, recruit and retain some of the best chefs in Essex.

Today, Premier Crew typically delivers over 250 events annually, ranging from large weddings and corporate events, through to smaller weddings, parties and BBQs. The team are very proud of their reputation and track record, which they’ve worked hard to build and maintain. 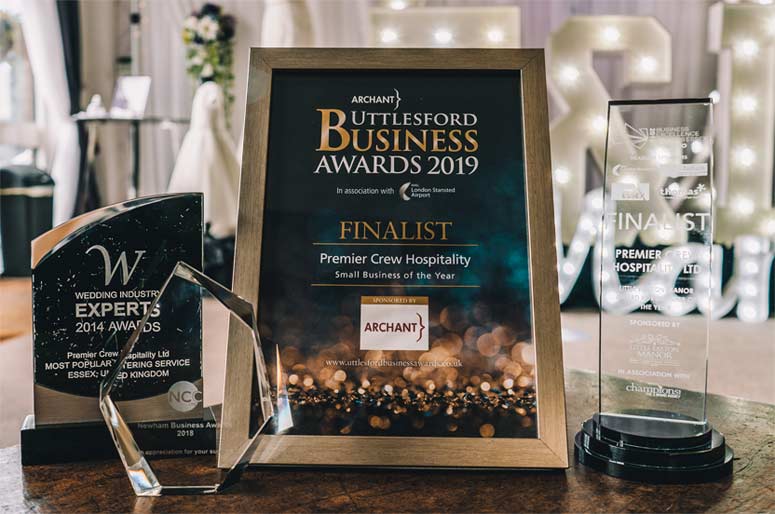 This website uses cookies to improve your experience while you navigate through the website. Out of these cookies, the cookies that are categorized as necessary are stored on your browser as they are essential for the working of basic functionalities of the website. We also use third-party cookies that help us analyze and understand how you use this website. These cookies will be stored in your browser only with your consent. You also have the option to opt-out of these cookies. But opting out of some of these cookies may have an effect on your browsing experience.
Necessary Always Enabled
Necessary cookies are absolutely essential for the website to function properly. This category only includes cookies that ensures basic functionalities and security features of the website. These cookies do not store any personal information.
Non-necessary
Any cookies that may not be particularly necessary for the website to function and is used specifically to collect user personal data via analytics, ads, other embedded contents are termed as non-necessary cookies. It is mandatory to procure user consent prior to running these cookies on your website.
SAVE & ACCEPT

Keep up to date on all things Premier Crew